Liz – Head of Circulation
What I like about our library – Our Graphic Novel collection. My last job was in a comics store and it’s great that I get to feed that love by ordering books for the section here.

Favorite genres of books (and audios): Horror, Sci-fi, Fantasy, True Crime, Gardening
Favorite Star Wars movie: The Empire Strikes Back. Proof that not all second movies in a trilogy are bad.

My husband recommended this series to me years ago; I’m now kicking myself for not starting it sooner. Naomi Novik’s lyrical fantasy writing and Simon Vance’s chameleonesque voice combine beautifully in this first audiobook of the Temeraire series. There are 8 more books and it’s been a struggle not to check them all out immediately.

Meet Will Laurence, a Captain in His Majesty’s navy during the Napoleonic wars. When his crew captures a French ship with a dragon egg that’s about to hatch, Will is chosen to bond with the creature so that it (and he) can be added to the ranks of the Aerial Corps and fight for the British Empire.  Will and his dragon, Temeraire, train together, read together and, ultimately, fight together in complex, thrilling aerial battles for King, Country, and their own lives. Dragons and officers alike are well-developed characters and a pleasure to root for (or against). It truly is, as many have said, Master and Commander meets Dragonriders of Pern.

Currently listening to – Fiction: The Witch Elm : A Novel by Tana French, read by Paul Nugent 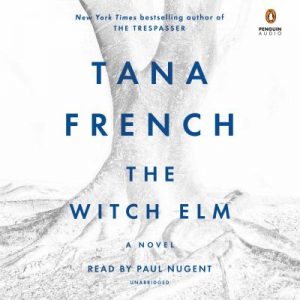 I was initially interested in this book because of the title, which reminded me of an infamous story out of British crime history. (I won’t include the name or details here to avoid spoilers.) While it feels like the seed of Tana French’s story may have been inspired by the same crime I had in mind, this book is so much more.

The story follows a young Irish man named Toby, whose life changes unexpectedly when he’s nearly beaten to death by two burglars in the middle of the night. He’s thrown into turmoil by the resulting physical and emotional damage and starts to question everything he thought he knew about himself. Paul Nugent’s narration is perfect. All the characters are instantly distinguishable at a word and his reading, especially in the intense parts, is visceral. I can’t wait to see how this one plays out.

About to start listening to – Nonfiction: The Botany of Desire : A Plant’s-eye View of the World by Michael Pollan, read by Scott Brick

This is a book that has been on my “to-read” list for years. I’m fascinated by nature shows like Planet Earth, as well as investigations into how humans interact with their environment (Silent Spring; Guns, Germs and Steel; Cod; Salt). Humankind from the point of view of the plants we grow is a unique take on this kind of topic. Scott Brick has read several of Erik Larsen’s titles that I’ve also listened to (Devil in the White City and Dead Wake) so I’m looking forward to another interesting nonfiction title with a solid narrator.

Interested in reading (or listening to) any of these books?

Give us a call at 978-674-4121 to reserve a copy for you to start reading, log into your account online to place a hold or email adultref@lowelllibrary.org for some suggestions of what to read next. We are happy to help!