Review of Year of Wonders by Geraldine Brooks by Anastasia 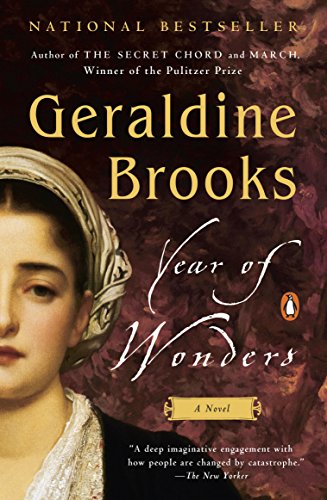 Review of Year of Wonders by Geraldine Brooks by Anastasia Sakellaris

I had to read this  book. It is set in England in 1666 during the bubonic plague.  Being in the midst of a present Covid 19 pandemic, I became curious about plagues during history, comparing the ones in the past and how people dealt with them with how we have dealt with the present one.

Although the book is fiction, it is inspired by  true events.  In the village of Eyam (pronounced “eem”), the villagers, under the direction of the town rector William Mompesson  made a decision to stay in their village rather than flee and spread the disease elsewhere. Through the eyes of a spunky fictional young woman named Anna Frith, who works as a servant for a rector named Michael Mompellion (who is based on Mompesson) and his wife Catherine, we see how these people dealt with the plague of their time.  Toward the end of the book, Anna discovers a most unexpected and shocking revelation about Mompellion and the ending is rather unique but still satisfying enough.

Just as interesting as the story, is the afterword in which the author tells us of her visit to Eyam and the research that led to her inspiration, including spending time with Eyam’s local historian John G. Clifford, author of the book Eyam Plague 1665-1666 (worth reading next?)  and reading 17th century medical texts and other writings.

So, how does how people dealt with plague then and how we have dealt with our present plague similar, and how is it different? What has changed is that we have advanced modern medicine, which gives us a tremendous advantage over our ancestors. Even bubonic plague can now be treated with antibiotics. What has not changed is human nature: the way panic so easily spreads, along with misinformation and surfacing of  both the best and the worst in people. Mistakes are made. In the 1666 plague, it was thought that cats and dogs spread the disease, and the heartbreaking slaughter of these animals eliminated the predators of the real culprit, the rats, and worsened the pandemic.

Have mistakes been made in how we have dealt with this pandemic? Was the lock down necessary? We do know it has resulted in spiked cases of alcoholism, drug addiction and suicides as well as an economic collapse. Were those prices worth paying? Could the disease been controlled without the lock down? Would we ever do a lock down again? How many, if any, liberties should we sacrifice for safety?

How we answer these questions will have an enormous effect on ourselves, our society, and how historians will record this plague in decades to come.

Place a hold on the physical or e-copies of this book on our catalog!