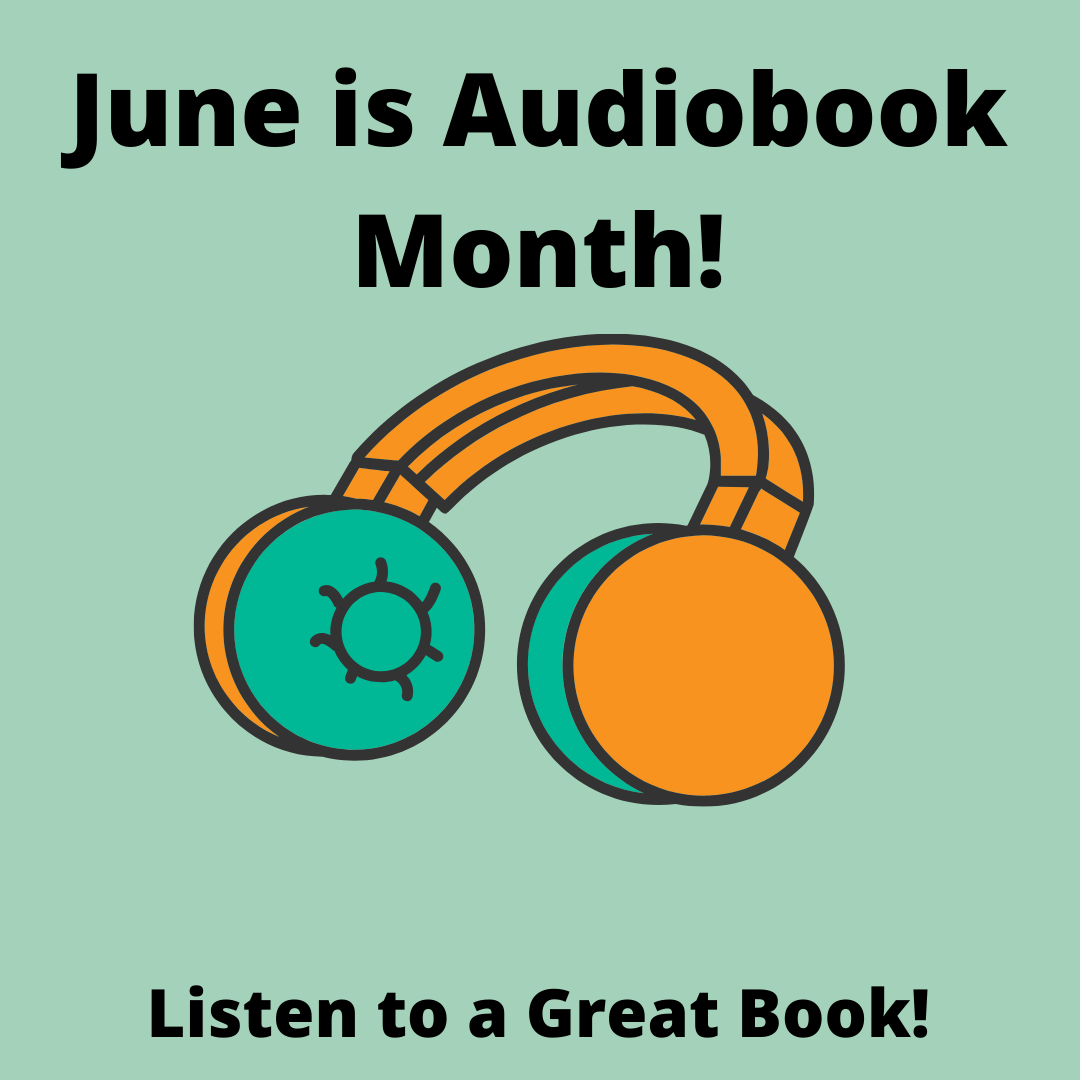 A few years ago, I started to listen to audiobooks in the car with my children. They were never as quiet as they were when we listened to books—a mother’s dream! Audiobooks aren’t only good for keeping the kids quiet; they are great entertainment for road trips, something to listen to while cleaning or folding laundry, and helpful to people with low vision or reading difficulties.

The narrator can make a big difference in the listening experience of the book, and some people look for particular narrators when choosing audiobooks. Some authors narrate their own books. This is especially common in memoirs. Sometimes celebrities narrate books. However, many books are narrated by people you may not recognize and are fantastic nonetheless. If you like a particular narrator, you can find additional audiobooks narrated by that person by doing an author search. 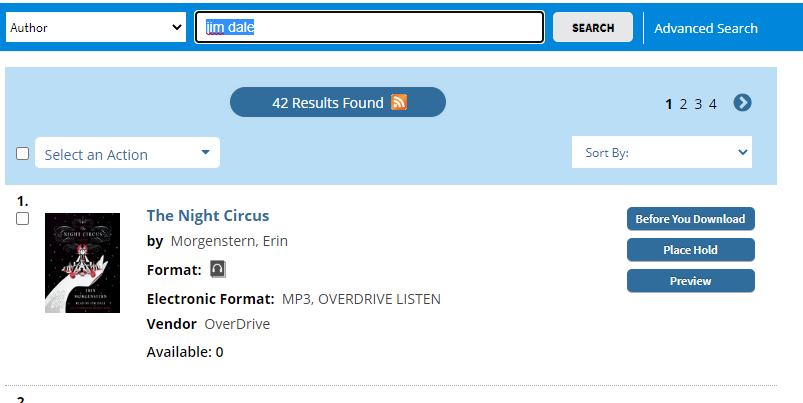 Audiobooks have their own awards, the Audie Awards. Here are some of this year’s winners:

Audiobook of the Year and Multi-voiced Performance

The Only Plane in the Sky: An Oral History of 9/11

By Garrett Graff; Narrated by a Full 45-Person Cast with Holter Graham

The story of the day as it was lived-in the words of those who lived it. Drawing on never-before-published transcripts, recently declassified documents, original interviews, and oral histories from nearly five hundred government officials, first responders, witnesses, survivors, friends, and family members, Graff paints the most vivid and human portrait of the September 11 attacks yet.

Request the Playaway for pickup when curbside available

Michelle Obama invites readers into her world, chronicling the experiences that have shaped her—from her childhood on the South Side of Chicago to her years as an executive balancing the demands of motherhood and work, to her time spent at the world’s most famous address. With unerring honesty and lively wit, she describes her triumphs and her disappointments, both public and private, telling her full story as she has lived it—in her own words and on her own terms.

Nothing to See Here

Lillian and Madison were unlikely roommates and yet inseparable friends at their elite boarding school. But then Lillian had to leave the school unexpectedly in the wake of a scandal and they’ve barely spoken since. Until now, when Lillian gets a letter from Madison pleading for her help. Madison’s twin step kids are moving in with her family and she wants Lillian to be their caretaker. However, there’s a catch: the twins spontaneously combust when they get agitated, flames igniting from their skin in a startling but beautiful way. Lillian is convinced Madison is pulling her leg, but it’s the truth.

Kingdom of the Blind

When a peculiar letter arrives inviting Armand Gamache to an abandoned farmhouse, the former head of the Sûreté du Québec discovers that a complete stranger has named him one of the executors of her will. Still on suspension, and frankly curious, Gamache accepts and soon learns that the other two executors are Myrna Landers, the bookseller from Three Pines, and a young builder. None of them had ever met the elderly woman. The will is so odd and includes bequests that are so wildly unlikely that Gamache and the others suspect the woman must have been delusional. But what if, Gamache begins to ask himself, she was perfectly sane? When a body is found, the terms of the bizarre will suddenly seem less peculiar and far more menacing. But it isn’t the only menace Gamache is facing.

The Ten Thousand Doors of January

In the early 1900s, in a sprawling mansion filled with peculiar treasures, January Scaller is a curiosity herself. As the ward of the wealthy Mr. Locke, she feels little different from the artifacts that decorate the halls: carefully maintained, largely ignored, and utterly out of place. Then she finds a strange book. A book that carries the scent of other worlds and tells a tale of secret doors, of love, adventure, and danger.

In 1940, 19-year-old Vivian Morris has just been kicked out of Vassar College, owing to her lackluster freshman-year performance. Her affluent parents send her to Manhattan to live with her Aunt Peg, who owns a flamboyant, crumbling midtown theater called the Lily Playhouse. There Vivian is introduced to an entire cosmos of unconventional and charismatic characters.

American Moonshot brings together the extraordinary political, cultural, and scientific factors that fueled the birth and development of NASA and the Mercury, Gemini, and Apollo projects, which shot the US to victory in the space race against the Soviet Union at the height of the Cold War. A vivid and enthralling chronicle of one of the most thrilling, hopeful, and turbulent eras in our nation’s history.

Young Hiram Walker was born into bondage. When his mother was sold away, Hiram was robbed of all memory of her – but was gifted with a mysterious power. Years later, when Hiram almost drowns in a river, that same power saves his life. This brush with death births an urgency in Hiram and a daring scheme: to escape from the only home he’s ever known. So begins an unexpected journey that takes Hiram from the corrupt grandeur of Virginia’s proud plantations to desperate guerrilla cells in the wilderness. Even as he’s enlisted in the underground war between slavers and the enslaved, Hiram’s resolve to rescue the family he left behind endures.

Narration by the Author or Authors

With the Fire on High

Ever since she got pregnant freshman year, Emoni Santiago’s life has been about making the tough decisions—doing what has to be done for her daughter and her abuela. The one place she can let all that go is in the kitchen, where she adds a little something magical to everything she cooks, turning her food into straight-up goodness. Even though she dreams of working as a chef after she graduates, Emoni knows that it’s not worth her time to pursue the impossible. Yet despite the rules she thinks she has to play by, once Emoni starts cooking, her only choice is to let her talent break free.

Although beautiful young widow Phoebe, Lady Clare, has never met West Ravenel, she knows one thing for certain: he’s a mean, rotten bully. Back in boarding school, he made her late husband’s life a misery, and she’ll never forgive him for it. But when Phoebe attends a family wedding, she encounters a dashing and impossibly charming stranger… none other than West Ravenel.

In this masterful collection of short fiction, Joe Hill dissects timeless human struggles in 13 relentless tales of supernatural suspense, including “In the Tall Grass”, one of two stories cowritten with Stephen King, basis for the terrifying feature film from Netflix.

In the middle of the night, in a house on a quiet street in suburban Minneapolis, intruders silently murder Luke Ellis’ parents and load him into a black SUV. The operation takes less than two minutes. Luke will wake up at The Institute, in a room that looks just like his own, except there’s no window. And outside his door are other doors, behind which are other kids with special talents – telekinesis and telepathy – who got to this place the same way Luke did.

Request the Playaway for pickup when curbide available

For the complete list of winners and finalists, visit https://www.audiopub.org/winners/2020-audies.