In Memory of Larry McMurty 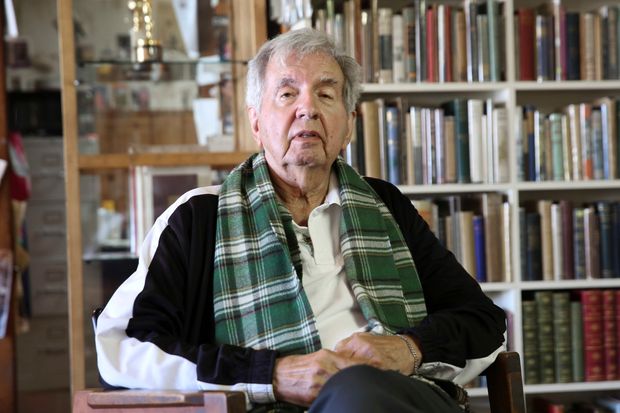 Click on any of the books above to go directly to their catalog page.

Larry McMurtry died on Thursday at the age of 84. The prolific author wrote fiction, nonfiction, and screenplays.  Even if you have not read his books, you may be familiar with his work. His novels Terms of Endearment and The Last Picture Show were adapted for film, and Lonesome Dove was made into an Emmy-winning television series. We have many of McMurtry’s books here at the library.  You can request items for curbside pickup Monday-Thursday 10-8 and Friday and Saturday 10-4. To reserve a Book or DVD, place a request in the online catalog, fill out a request form, or call the reference desk at 978-674-4121. Please note that access to the building is by appointment only. The stacks are not open for browsing at this time.

In Dead Man’s Walk, the prequel to the bestselling books, Lonesome Dove and Streets of Laredo, McMurtry dazzles readers once more with the early adventures of two of the most memorable heroes in contemporary fiction–Augustus McCrae and Woodrow Call. National ads/media.

The Pulitzer Prize­–winning American classic of the American West that follows two aging Texas Rangers embarking on one last adventure. An epic of the frontier, Lonesome Dove is the grandest novel ever written about the last defiant wilderness of America.Journey to the dusty little Texas town of Lonesome Dove and meet an unforgettable assortment of heroes and outlaws, whores and ladies, Indians and settlers. Richly authentic, beautifully written, always dramatic, Lonesome Dove is a book to make us laugh, weep, dream, and remember.

The youth of a small town in mid-twentieth-century Texas search for ways to escape boredom and experience life and love.

Recounts myths of the closing decades of the western frontier viewed through the eyes of Nellie Courtright and her brother Jackson, orphans that make good in the town of Rita Blanca in what would become the Oklahoma Panhandle.

In a prolific life of singular literary achievement, Larry McMurtry has succeeded in a variety of genres: in coming-of-age novels like The Last Picture Show; in collections of essays like In a Narrow Grave; and in the reinvention of the Western on a grand scale in his Pulitzer Prize-winning novel, Lonesome Dove. Now, in Books: A Memoir, McMurtry writes about his endless passion for books: as a boy growing up in a largely “bookless” world; as a young man devouring the vastness of literature with astonishing energy; as a fledgling writer and family man; and above all, as one of America’s most prominent bookmen. He takes us on his journey to becoming an astute, adventurous book scout and collector who would eventually open stores of rare and collectible editions in Georgetown, Houston, and finally, in his previously “bookless” hometown of Archer City, Texas. In this work of extraordinary charm, grace, and good humor, McMurtry recounts his life as both a reader and a writer, how the countless books he has read worked to form his literary tastes, while giving us a lively look at the eccentrics who collect, sell, or simply lust after rare volumes. Books: A Memoir is like the best kind of diary — full of McMurtry’s wonderful anecdotes, amazing characters, engaging gossip, and shrewd observations about authors, book people, literature, and the author himself. At once chatty, revealing, and deeply satisfying, Books is, like McMurtry, erudite, life loving, and filled with excellent stories. It is a book to be savored and enjoyed again and again.

The Colonel and Little Missie: Buffalo Bill, Annie Oakley and the Beginnings of Superstardom in America

From the early 1800s to the end of his life in 1917, Buffalo Bill Cody was as famous as anyone could be. Annie Oakley was his most celebrated protegee, the ‘slip of a girl’ from Ohio who could (and did) outshoot anybody to become the most celebrated star of Buffalo Bill’s Wild West Show. In this sweeping dual biography, Larry McMurtry explores the lives, the legends and above all the truth about two larger-than-life American figures. With his Wild West show, Buffalo Bill helped invent the image of the West that still exists today – cowboys and Indians, rodeo, rough rides, sheriffs and outlaws, trick shooting, Stetsons, and buckskin. The short, slight Annie Oakley – born Phoebe Ann Moses – spent sixteen years with Buffalo Bill’s Wild West, where she entertained Queen Victoria, Emperor Franz Joseph of Austria and Kaiser Wilhelm II, among others.

In Oh What a Slaughter, Larry McMurtry has written a unique, brilliant, and searing history of the bloody massacres that marked — and marred — the settling of the American West in the nineteenth century, and which still provoke immense controversy today. Here are the true stories of the West’s most terrible massacres — Sacramento River, Mountain Meadows, Sand Creek, Marias River, Camp Grant, and Wounded Knee, among others. These massacres involved Americans killing Indians, but also Indians killing Americans, and, in the case of the hugely controversial Mountain Meadows Massacre in 1857, Mormons slaughtering a party of American settlers, including women and children. McMurtry’s evocative descriptions of these events recall their full horror, and the deep, constant apprehension and dread endured by both pioneers and Indians. By modern standards the death tolls were often small — Custer’s famous defeat at Little Big Horn in 1876 was the only encounter to involve more than two hundred dead — yet in the thinly populated West of that time, the violent extinction of a hundred people had a colossal impact on all sides. Though the perpetrators often went unpunished, many guilty and traumatized men felt compelled to tell and retell the horrors they had committed. From letters and diaries, McMurtry has created a moving and swiftly paced narrative, as memorable in its way as such classics as Evan S. Connell’s Son of the Morning Star and Dee Brown’s Bury My Heart at Wounded Knee.I n Larry McMurtry’s own words: “I have visited all but one of these famous massacre sites — the Sacramento River massacre of 1846 is so forgotten that its site near the northern California village of Vina can only be approximated. It is no surprise to report that none of the sites are exactly pleasant places to be, though the Camp Grant site north of Tucson does have a pretty community college nearby. In general, the taint that followed the terror still lingers and is still powerful enough to affect locals who happen to live nearby. None of the massacres were effectively covered up, though the Sacramento River massacre was overlooked for a very long time. “But the lesson, if it is a lesson, is that blood — in time, and, often, not that much time — will out. In case after case the dead have managed to assert a surprising potency. “The deep, constant apprehension, which neither the pioneers nor the Indians escaped, has, it seems to me, been too seldom factored in by historians of the settlement era, though certainly it saturates the diary-literature of the pioneers, particularly the diary-literature produced by frontier women, who were, of course, the likeliest candidates for rapine and kidnap.”