Autumn in New England - Get Reading! 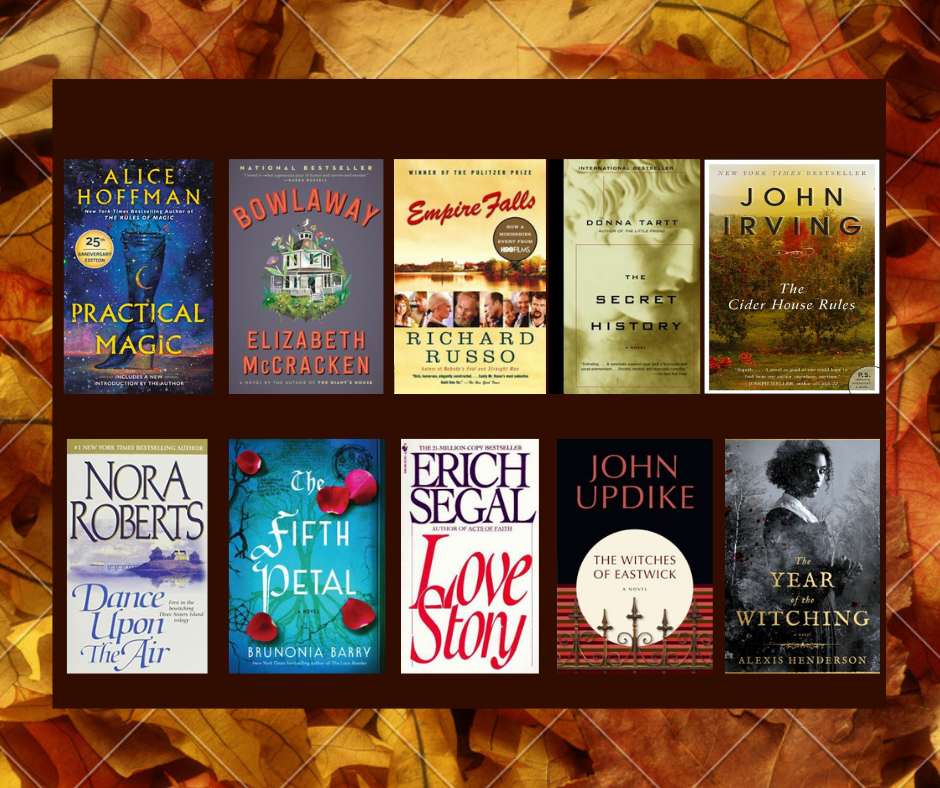 There’s nothing like fall in New England–the foliage, the flannel, the apple orchards. Check out these 10 reads, set in New England, that evoke a cozy autumn atmosphere. These stories will have you sipping pumpkin spice lattes and seeing witches around every corner.

Practical Magic – Alice Hoffman
Book | eBook | Audiobook
In a fictional Massachusetts town, two sisters are raised by their witch aunts, who warn them that there is a curse on all the women in their family. Eventually, the magic they’ve denied all their lives–and the notorious curse–catches up to them. Practical Magic was made into a film starring Nicole Kidman and Sandra Bullock.

Bowlaway – Elizabeth McCracken
Book | eBook | Audiobook
Bertha Truitt, oddball and candlepin bowling enthusiast, opens a bowling alley in fictional Salford, Massachusetts at the turn of the century. The story follows three generations of Bertha’s family as they navigate their lives and keep the bowling alley running.

Empire Falls – Richard Russo
Book | eBook | Audiobook
Miles Roby manages a diner in small-town Empire Falls, Maine, chock full of colorful characters that have known each other all their lives. These deep relationships play out with humor, drama, and several surprises. The movie adaptation was filmed in Skowhegan, Maine.

The Secret History – Donna Tart
Book | eBook | Audiobook
A young, naïve freshman at a picturesque college in Vermont fights for acceptance into a secretive group of privileged Classics students, and once there, takes part in a tragedy that he then narrates as a mystery to the reader. The school and surrounding town is based on Bennington College in Vermont.

Dance Upon the Air – Nora Roberts
Book | eBook | Audiobook (CDs)
Nell escapes an abusive husband and begins to build a new life on fictional Three Sisters Island in Massachusetts. This book is the first of a trilogy about three friends who find their true identities as witches and as women.

The Fifth Petal – Brunonia Barry
Book | eBook | Audiobook
When a teenager is murdered in Salem, Massachusetts, the chief of police sees similarities to a string of murders from 20 years ago. While not exactly a sequel, this book is set in the same universe as Barry’s The Lace Reader and The Map of True Places.

Love Story – Erich Segal
Book
College students Ollie and Jenny meet and fall in love on the storied sidewalks of Cambridge, Massachusetts. They try to create a life together without support from either of their families, and tragedy strikes. This book is a novelization of the screenplay Segal wrote for the 1970 movie of the same name, which was filmed partially on location at Harvard University.

The Year of the Witching – Alexis Henderson
Book | eBook | Audiobook
Immanuelle, daughter of a frowned-upon interracial affair, discovers her deceased mother’s journal and learns the truth about her puritanical hometown. The story takes place in a fictional version of Salem.